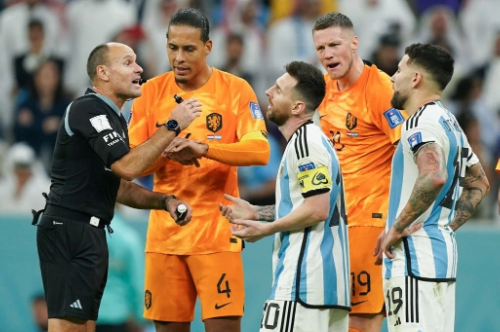 Lionel Messi will face disciplinary action from FIFA as a result of his inappropriate behavior during the match that was played against the Netherlands.

As a result of the widespread criticism directed at Argentina’s national soccer team and their referee, FIFA has made the decision to take disciplinary action against the players on the team as well as the Argentine Football Association. As a result, there is a possibility that Lionel Messi, the captain of Argentina’s team, may be found guilty and would be barred from participating in the semifinal match against Croatia.

FIFA has opened an investigation into a possible violation of articles 12 and 16, which deal with inappropriate behavior on the part of players or any other team member during a match and determine what actions should be taken in response. Messi has been subjected to disciplinary action as a result of the criticism that he received for making disparaging comments against the referee, Antonio Lahoz.

The quarter-final matchup between two powerhouse teams, the Netherlands and Argentina, is shaping up to be a vicious one. The lack of discipline displayed by both teams during that game, along with that of their coaches and other teammates, is the major issue that needs to be addressed. As a direct consequence of this, the referee flashed the yellow card sixteen times.

Along with having heated arguments, the players clashed in the closing minutes of the game after the Dutch scored two late goals. A two-yellow card penalty shootout resulted in Denzel Dumfries of the Netherlands leaving the pitch due to the intensity of the confrontation. Lionel Messi and Argentine goalkeeper Emi Martinez both voiced their displeasure with Antonio Mateu Lahoz after the game.

As the Dutch overcame two goals to force extra time, there were many clashes and furious comments during the face-off at Lusail Stadium. Messi is well aware that if he criticizes Mateu Lahoz more, he runs the risk of receiving a penalty. In response, he stated that he did not want to comment on the referees since he would be punished, but Messi and his team were anxious before the game because they knew what would occur. He continued by stating that he was unable to offer an opinion on the topic and that FIFA should investigate it.